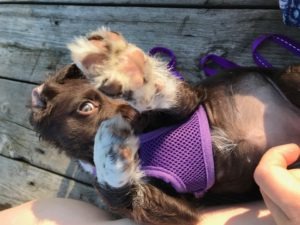 From the beginning, there was a puppy that stood out a little extra in all the videos the breeder posted in our little puppy group on Facebook. It was the brown with white paws.

It was first to walk, first to get outside the puppy pen, first to find the stairs and learn to run up and down in them, it fearlessly climbed around the puppy pen full of rattling objects and other stuff. And I thought “I should NOT have that puppy. It is wonderful and lovely, but I should not have it. I am going to have a gentle, simple medium puppy who does not stand out but has just the right amount of everything. 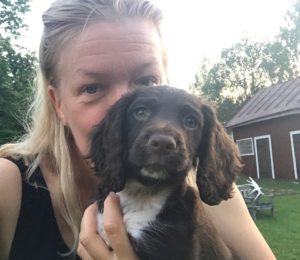 The weeks went by and my eyes continued to stick to the brown with white paws – it was also incredibly cute with its white paws. Although the whole litter was incredibly nice with safe and curious puppies in a lot of different colors. So, when it was time for the breeder to make sure the right person got the right puppy, she offered me the “little sock”, which she was called, and I thought for half a day and then said “yes”. Some things just happen …;)

Now I’m sitting in the grass watching my little puppy and thinking about all the skills she already has. How amazing it is to see so much in them when they’re only nine weeks old. This dog is confident, plucky, trusting, cocky and playful. Here at home, she goes by the name “terror puppy”, ha-ha, at least late in the evening when the evening rush comes. 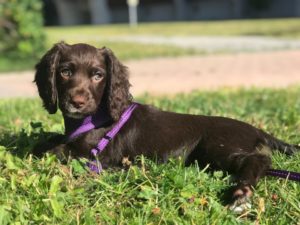 She’s so small! I haven’t had such a small puppy in seven years – when Tassla came to me – because Quling was 15 weeks because of import rules for EU countries when he came three years ago.

There is a lot of baby over her. She eats, sleeps, plays, poops. We bond. The other dogs try to recover from the shock that a rather disgusting puppy moved in with them.

We picked up Flippa in the Umeå area (northern parts of Sweden) and only drove an hour to the hotel in Örnsköldsvik the first evening. I do not like the pickup itself because I feel sorry for taking the puppy from its 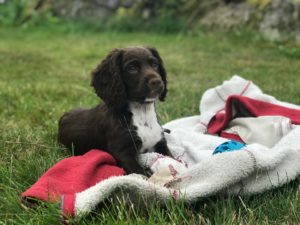 mom and siblings – all that is known for it. She whined, almost howled, all the way to Örnsköldsvik. Climbed on and tore at me and seemed to almost panic. We stopped a few times and then she calmed down immediately. But I worried a little about the next few days’ journey of 1200 km or so.

However, I did not have to worry about that. The next day we made sure she was tired, and she became that by all the impressions in a city – buses, a truck, cars, people, bicycles and gulls as big as she is. And everything is new, we are new, new family of dogs, new sounds, new experiences all the time. So, after five minutes of a little upset whining, she can calm down with a little help and lie down in the crate. And after each break, that time gets shorter and shorter – towards the end of the day she 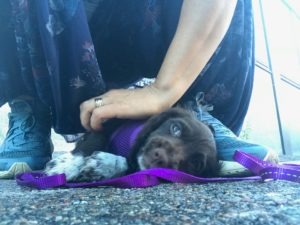 went straight into the crate and laid down straight away.

We stayed for a few days in Dalarna with my sister and Flippa adapted incredibly well to the situation. Day two I managed to get Quling to play with her. I know he is the nicest dog in the world and very playful. He will be the best play mate sooner or later. I played him as I usually do by making invitations to play with him and when he answered, Flippa answered him and they could take over the game. However, I wanted the game to be calm and not just them running madly as it is a pretty big risk of injury when the puppy is so small and Quling is relatively large. Quling was so good with her and even listened to me when I asked him to calm down. And I managed to catch some of it on film:

Otherwise, I have mostly devoted myself to teaching her her name. I do it when she’s in a playful mood and when it’s time for food – so she gets some of the food as a reward. The first session I also got on film: 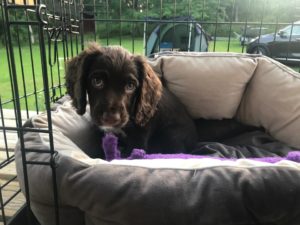 Otherwise, it is quite exhausting trying to keep everyone satisfied. It was good that we started by being away from home because Tassla has a few places she likes to guard at home, and I don’t want the puppy to be exposed. Once at home I have divided the house with compost grates. The big dogs can move in and out as they please, while Flippa is in the kitchen where there is also a crate that she can go into and sleep in if she wants to sleep undisturbed.

None of the adult dogs like the puppy, although Quling has softened a bit. Tassla tenses a little if the puppy insists on being close to her or sniff her and Flippa is incredibly good at understanding dog language and the 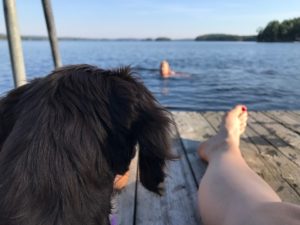 small signals. I am very happy about that. I do not want Tassla to have to exaggerate her signals and I do not want Flippa to be exposed to Tassla’s outbreak. I separate them some of time, so I don’t have to “join in” all the time.

Totte has just returned from a week’s camp with friends by the sea. He sniffed the puppy and then tried to ignore her as much as possible. She has tried to flirt with him a bit, but he has just said “no thanks”. However, it is noticeable that he does not have as much authority – Flippa does not respect him at all as well as Tassla. I must help him a little sometimes and distract the puppy. 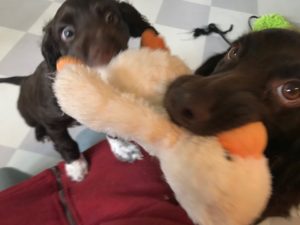 I think the grownups are a little tough and boring – poor Flippa comes from playing all day to three more or less dismissive dogs without humor. 😉 However, my hope is for Quling – I know he will soften. He is also very influenced by the situation – he has always been “the little one” and he is usually very close to me. Now he seems a little lost. I try to have moments with just him and after a few nights he came and slept with me as he usually does, even though the puppy also slept there. Now a period of getting used to everyone involved will follow. I don’t get much else done right now, that’s one thing that’s for sure. But this puppy time usually just flies by – suddenly they are big, and you wonder what happened. 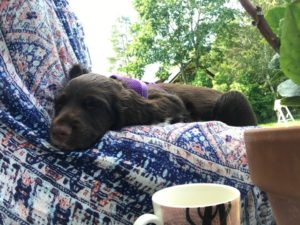 The training of the puppy becomes a natural part of everyday life. We play, she knows her name, I reward the huge amount of contact (cuddles, reinforces with her voice, gives a treat when she sits in front of me and so on) and I have started some play retrieving a bit with her with a ball. She plays tug like crazy. Then I will gradually start teaching her things that are important to her future life as a hunting dog.

Of course, I have a long list of things I want to teach her, some basic skills that she will benefit from in the future. I look forward to, as soon as our daily routines have settled down a little more, to start teaching her some small things like coming to me with objects, stopping on cue, sitting still, but also loose leash walking and recall of course. And the early, fun casting exercises using food bowls! And self-control! There are lots of fun, playful basics that I look forward to starting to train soon. 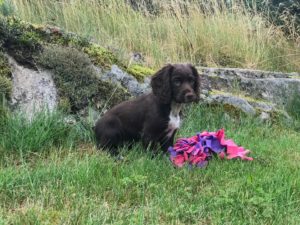 Do you have a puppy as well? I intend to start a coaching group online, on Facebook, for you who have a gun dog puppy between 2 and 5 months. For twelve weeks we follow each other and lay a foundation for a good everyday life and training of our gun dogs. I will post a theme each week, with suggestions on tasks to think about or do with the puppy, we discuss it together and give each other tips, and I give feedback on movies that you – if you want – post in the group. The course starts on August 21th and ends on November 13th. You can join the group until August 31th, then it closes.

You then have access to the group for another month, but I will not be active in the group after that.