Choose your cues with care – and teach them even more carefully!

Just as it doesn’t matter which whistle you choose it doesn’t matter which other cues you choose to use with your dog. The important thing is that you teach the dog exactly what each cue means. For example, some people want to use the dog’s name as a cue for permission to do things (go out the door, retrieve a dumbbell and so on, depending on the situation) and others want the dog’s name to function as a cue for attention, followed by other cues telling the dog what to do. Some people want different cues for each specific situation, and some want to use the same cue more generally.

Depending on the context, there are some cues that are used traditionally, for example “sit” for the dog to sit down or several short whistles for the recall. However, a dog can just as easily learn to sit down on the cue “ketchup” and come on recall on the cue “motorcycle”. Random cues might be more difficult for us to remember. And if you want to kind of “fit in” for example in a trial situation, using “traditional” cues might simply be easier. 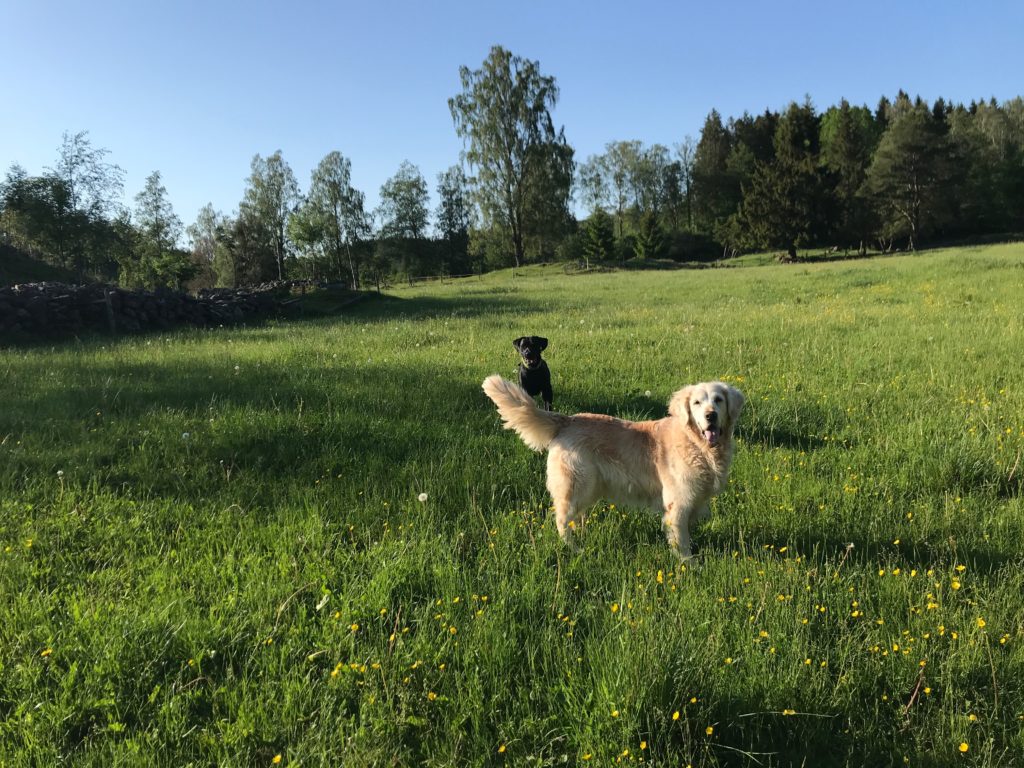 Sitting or standing on the stop whistle? Long or short whistle signal for stop? It doesn’t matter as long as you and your dog are in agreement!

In the blog post below, you can see common whistle signals and hand signals:

One thing I’ve heard many times is to refrain from using “right” and “left” as directional cues, and instead only have one cue for both sides because it looks so ridiculous if the dog chooses the wrong direction and goes to the right when cued to go “left” “. I would claim that it looks at least as ridiculous if you say “there” and point to the right and the dog goes to the left… 😉 And if you can’t really see your dog where you’re working, I also think having two different verbal cues is a great advantage, making it possible to direct the dog to go left or right.

No matter which verbal cues and whistle signals you choose, you need to teach them properly to your dog, so that he really learns to respond to the cues in different situations. And if you use “traditional” cues in trial situations where other people might be using the same cue at the same time, it’s important that you teach your dog to perform the behavior only when you’re the one cueing it.

When teaching a new cue, we’ll choose one of the following ways:

Most often, we’ll start from “scratch” and get the behavior offered voluntarily and then add the cue according to the following “cue ladder” (it’s described in more detail in our book “Retrieving for All Occasions”):

When Keen came to me, I spent quite a bit of time making him understand that the cues he already knew meant the same thing when I gave them, and also on teaching him the cues I use. I realized I wanted to change some cues, for example, I switched from whistle 211.5, which he was used to, to whistle 210.5, which I’m used to.

I trained the stop whistle from scratch, the way I described above in the cue ladder, because Keen had a standing stop and gladly took a few steps towards me before he stopped. I want my dogs to sit on the stop whistle to begin with, because I feel that the dog gets steadier that way.

I have also changed his cue for fetching marked retrieves. Since he was used to doing things when he heard his name (retrieving a mark, jumping out of the car and so on), while I wanted to use the name as an attention cue, it became a little difficult for him. I changed the cue for marking to make it all clearer. His new cue for marking is “eager” – a cue on the same theme as his name; Keen, making it easier for me to remember. I trained the new cue from his old cue, so I threw a mark and said “eager – Keen” until he understood what “eager” meant.

When the dog has a decent understanding of the cue, we begin working with distractions – and this is where the fun begins! This is where we really proof the behaviors and make sure that the dog understands what the cue means regardless of what’s happening around us. In the video below you can see how I work on generalizing the sit cue. We do this with all the cues we teach our dogs – and we then also begin mixing the cues, so the dog really gets to practice differentiating between them.