Interview with the winner of the Spaniel Championship 2017: Anna Lindholm 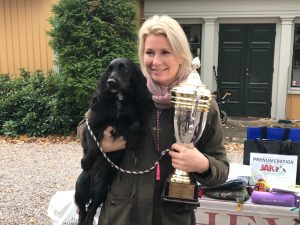 Anna Lindholm, Spaniel handler and breeder, won the Swedish Spaniel Championship 2017 together with her dog Wildphoebe Nighthawk “Penny”. She also received a prize for the best Swedish bred dog and became “The Spaniel Champion”. The latter means that Anna and Penny were crowned as master over both working bred Springer and Cocker spaniels. Last but not least, she also won the award as “Gun’s Choice” – the dog that the shooters considered to be the best to shoot over during the Swedish Spaniel Championship. Anna has four working cocker spaniels: Phoebe 10 years (holder of 1st prize in obedience class 3 and 1st prize in the master hunting class – currently winner’s class). Phoebe is also the mother of Esther, 4 years and Penny 2 years. In addition, they also have Ruby 5 years in the family.

Anna, who are you? 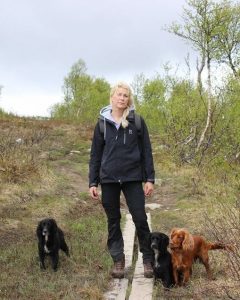 I am a self-employed entrepreneur with eight employees and since 2001 I run Vinsta dog center where we have three dog day-cares and sell dog food. I got my education as a dog psychologist and instructor at ‘Hundens hus’.

In 2013, I started my kennel Wildphoebes. I do not feel like a “real” breeder, I have until now only two litters from my bitch Phoebe. The kennel was created because I wanted to have a puppy by Phoebe because she has all the traits that I think a working cocker should have: She is not sensitive to different environments and has no fears. She also has a great bidability and she is healthy. And of course, she has a great desire to hunt.

Penny was born in 2015 and she is very much like her mother, Phoebe. What separates them is that Penny has a softer personality. Penny is extremely responsive to my signals – even more than her mother. Penny is also confident in different environment and might be even more cooperative than her mother. She also has a great desire to hunt. Penny is the typically working Cocker and has a tight quartering pattern. She becomes very effective in covering the ground in that way. A Springer spaniel moves more from right to left with larger strokes in front of the handler, but Penny moves just as Cockers usually do – in smaller, twisting turns.  She never misses to flush a pheasant or rabbit. But in tough fields like high reed with little game, her hunt style may not be as effective.

Last year, only one year old, she won the junior hunt test. It was her first trial. At her second field trial, she received the 1st prize and was moved to master hunting class. And just now she won the Swedish Spaniel Championship 2017. Penny has, from her mother, inherited a spontaneous stop when flushing game. Many hunting spaniels have this trait as youngsters but you must consolidate it, otherwise it will disappear. One must take every opportunity to reward the dog when the trait to stop appears, even if the dog only hesitates for a split second. 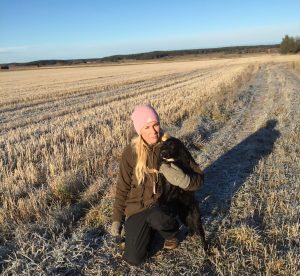 What is your training philosophy?

From the beginning, when I bought Phoebe, I mostly trained obedience and thought I would use hunting as a stimulation since I actually had a gun dog. I had no idea what it meant to train a gun dog. I was thrown into the world of game hunting and was completely terrified of what I experienced. The exercise was often made to provoke the dogs to do the wrong thing and when they do you correct them. To use these methods – it is against everything I believe. My dogs are my family members, not tools. To deliberately make a dog fail and then correct him – that philosophy is so weird as there are so many other ways to train a dog. It’s completely foolish.

My philosophy is that is never the dogs fault if he does not perform as I expected. It is always my fault. It is me who should learn how to guide my dog in a nice way. If my dog does not like the way I train with him, then it is not a good way to train either. It should be a positive experience for both me and the dog to work together.

What do you do when things go wrong?

How do you reward the dog?

If the dog does what it is supposed to do, a reward always follows. Rewards are very good to work with in every way. When hunting the reward may of course be to keep hunting.

I often use treats or food as a reward when I am about to teach my dogs something new, because it has a calming effect. I usually avoid tug toys or chasing games because it is usually not necessary to add more stress to the hunting situation. But I play with puppies of course, to awake the hunting instinct in a playful way.

I often use bowls with treats in casting exercises and when hunting I use external rewards. For example, I place a rabbit dummy behind me before we start and when she is hunting in a good way she can, on cue, go and get it.

What do you think is the most important thing to keep in mind when training a spaniel?

The relationship is the most important. The first thing is to get a good relationship with your dog. Get the dog to want to work with you. You get a lot of things for free with a working bred spaniel: they have a natural hunting drive from the start. Encourage the dog’s natural qualities through play – encourage the dog to play with you. Get the dog to understand that he will get that reward – chasing after the pheasants and flush them – with you, you will experience the reward together.

Very few working bred spaniels are born without hunting drive. But I think we breed dogs with a high hunting drive but without bidability. There must be a willingness to cooperate from the start. Once you get good cooperation and a good relationship with your dog, spend a lot of time making the dog work the ground near you. Let it search no more than two to three meters away, all fun things that happens should be close to you. Do this for a long period of time, even when you come to a field with game scent. The dog will push the borders, you can count on it.

Then it is the steadiness. Take a lot of time training steadiness so the dog understands what you want; teach it to interrupt an activity and sit down. Confirm that it’s correct not to chase after random things. 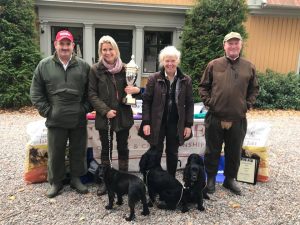 How was it winning the Swedish Championship?

It felt like it was unreal! But it was a great confirmation that all training – and the experience my dogs have given me until today – has worked. I have learned different things from all my dogs which in turn has led me to the winning of the Swedish Championship.

I’m proud that I proved myself right, that my training methods and my view on training my dogs are working – even in difficult hunting situations.

What are the future plans for you and your cockers?

Since the trial season is over, the upcoming month will be about basic training. There might be some hunting in January. The dogs need some well-deserved rest and physical exercise to keep them in a good condition.

In the winter months, I keep them fit by swimming at a dog swim close to Stockholm. In the future, I will try to attain the Master hunter spaniel title with Penny. Even further ahead, the plan is for Penny to get her own puppies. But that is about 1-2 years in the future. Then hopefully the journey begins with my next star.