Quling – A Year Old and Still a Puppy

”The puppy” turned one year old a while ago! Hunterfull Quling has been a part of my pack since the beginning of June last year and it’s been an interesting, demanding and fun year, all in one.

I wanted a very different dog from Tassla. Not that there’s something about her that I don’t like – she’s amazing – but because I wanted to learn new things. I wanted a dog with even more power and speed, and I searched within lines that I was familiar with. I ended up with the Danish breeder with the name Hunterfull. I also wanted a brown male (yes, it’s true, colour was part of the criteria). I had met the breeder, Fleming, and I knew that we shared training philosophy, which was an added bonus. I also like the fact that his wife runs all their hunting dogs in agility. They are multi talented – for example, Quling’s mother is a Danish agility champion. 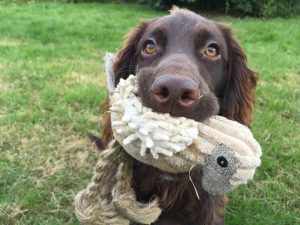 Quling is the most good-natured and kind being imaginable. He is pure love. Cuddly as a cat.

Had he been human, one would have said that he has good self-esteem. Everything about him just goes without saying. ”Here I am, I’m not just handsome and nice, but also very talented. And humble”. He’s soft and kind and yet a complete maniac outdoors (and sometimes indoors too).

Someone sent me this quote by a Spaniel guru:

”An absolute prerequisite for a Cocker Spaniel to become a good hunter is that it has the correct, breed specific temperament. It should be happy, lively, tough, confident, outgoing and completely lacking of inhibitions.” (Keith Erlandson, 1987) 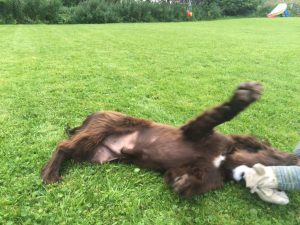 His personality and different traits have been clear from day one, and when he was five months old he discovered the meaning of life: hunting. After that day, I basically can’t have him off leash. He begins hunting in a flash. Not until this month did we begin to take off the long line and start working on recalls without that safety net.

He’s the most immature dog I’ve ever had. He’s still just a big puppy. It’s incredibly charming and sometimes troublesome. His ability to focus has been very limited, and it has taken until now for him to be able to focus for slightly longer periods of time.

Quling is also the puppy I’ve trained the least. Not intentionally, but my life has been a bit messy and I haven’t had neither the energy nor the time. Unfortunately I think he’s the puppy that would have really needed a lot of training, but it hasn’t been possible.

I haven’t been at my best during this time of my life. My dogs have definitely felt this. During Quling’s first few months with me, he also got worms a multitude of times. I don’t think he was feeling on top of the world either and that showed in that he chewed on EVERYTHING. 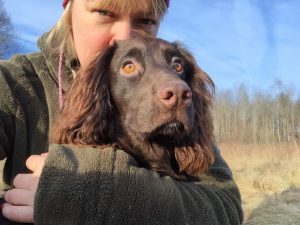 Quling is a smart dog, he learns quickly but with a little delay. You might not see progress in the first training session, but by the second session he seems to have slept on it and knows exactly what to do. As soon as he gets a bit tired or if I haven’t kept the session short enough, he logs out. Literally. He can turn on the spot and run off into the nearest forest/ditch/shrubbery and disappear. In a second. He doesn’t run far, but there’s no way to get his focus back and he’s very fast. Sometimes I haven’t even managed to grab the long line.

My line of thinking has pretty much been ”ok, let him grow up, and I’ll focus on not letting him do too many things that takes him in the wrong direction behaviour wise”. That’s a pretty defensive and boring standpoint. But I’ve done small things, details, some foundation work, trying to focus on making myself more valuable to him and not much else. Naturally, I have been reluctant to push him at all. We’re all different and that goes for dogs too! And that is also the beauty of getting to know a new individual.

The last couple of months, something has slowly begun to happen with both Quling and myself. From having some training sessions being more or less chaotic, Quling has begun to be able to focus a lot more and really pay attention to me. The periods of focus become longer and longer.

I saw from the beginning that this dog hunted wonderfully , BUT it has only surfaced for very short periods of time and I have had a hard time getting it to show in training. I stopped training hunting and thought that we would begin working on it when it surfaced. It hasn’t done so until now, but it shows great promise. 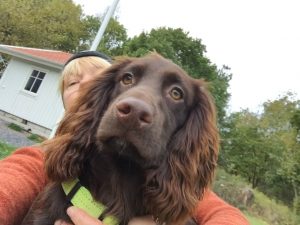 We’ve been through a lot, like for example him consistently letting go of ALL objects about two yards from me when I first got him. The first couple of months I only played games that were about him holding, holding, holding onto the objects, not delivering them, even as he ran into my arms. It solved itself after stubborn and perseverant training where I was really consistent with my criteria. Roughly about the time that was sorted out, he came up with the idea of victory laps instead… He would take the dummy and run a lap at remarkable speed. So, back to foundation work where he was heavily rewarded for coming straight back in. I’m so lucky to get dogs that make me a better trainer…

He’s also a hunter extraordinaire. He’s manically interested in small birds. Naturally I don’t object to him being very interested in birds, but there has to be some limits. He’s not allowed to chase them like a maniac in the garden, and he doesn’t get to just freeze and stare at a bush during our walks. 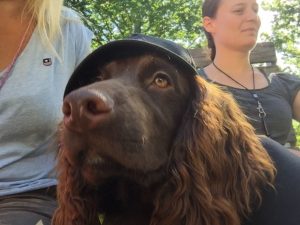 But what’s the most special about Quling is his unbridled enthusiasm. He’s enthusiasm personified. He’s like a big happy chocolate cookie. His humans who live with him are all just in love with this great personality.

And I got what I asked for. There’s a lot of dog in this small body. Now, when we’re venturing out of our first messy year together, I’m full of confidence and happy about training him. Perhaps this is a dog that will take a lot of time in training, and that’s just fine. I went the other way with his ”sister” Tassla, who competed and qualified in obedience before she was a year old, just to go on to the highest class in obedience pretty quickly. Quling is not going to be competing in obedience, but he’s definitely going to learn a great many things and become my hunting dog. But in his own time.

So! Happy birthday, Qulan darling, I look forward to our next year together!