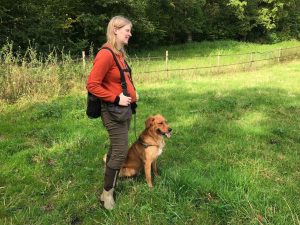 A great many things worked well at the last trial, but unfortunately I think that all the self-control that the heeling required made it too hard for him to keep himself together when handling the game. This time the plan was to see how he would handle the game if I relaxed my criteria for the heeling – an exercise where Seeker really has to fight to keep himself together. This meant that the heeling was less distinct again this time (but still better than the first time), but that he handled the game well. (He then chose to exchange his price for a gull – so we’ll go home and work on that instead…)

We didn’t have as long of a warm up this time (last time we warmed up with at least 20-30 minutes of heeling). He got to run off some steam and then we worked on the heeling for five minutes. We were the third team out this time and the dog before us didn’t finish, so it was our turn really quickly. Last time we were number 14 and he had been lying in the car, getting a lot more excited than he got a chance to become this time.

Again, he was completely steady and held his sit while I took off the leash. ”Leash off” is a cue for him to sit in position/heel. It hasn’t been trained well enough to work in a trial situation before; I’ve had to help him out with an extra sit cue. I was happy with the heeling up to the marked retrieves and made sure to show the judge how steady his was by waiting a little bit longer before sending him. Heeling towards the water was difficult, note my hand patting my thigh… When watching the video, it looks better than it felt. That’s good! But we did get one bounce heading towards the water and one bounce heading away from it.

He solved the water marks really well, even if he did aim a bit to the left of the first one when heading out. He then caught wind of it and swam straight to it. The deliveries out of the water were both great. I’m really pleased with how those have turned out. Then it was time for more heeling, a long stretch towards the hunting area. Heeling behind a shooter and for longer stretches is still really difficult; we need to work more on that.

He hunted really well. He covered the ground well and got everything. My priority was to get him going deep first, since he’s found that difficult before. If we had got the closest gull first, we would have avoided the problem that followed. When he was coming in with the crow, he got wind of the gull and exchanged the crow for the gull. My whistle came too late as well. We need more training on coming straight back in and on taking the first bird – he doesn’t get to choose the gull instead! With Diesel I had to work really hard on getting her to take gulls. At least I don’t have that problem with Seeker… When I sent him the next time, he ran past the crow and I asked the judge  – whom had all ready pulled us since we DQ’d when he swapped the birds – if I could work on getting him to take the crow. The judge was fine with that, so we worked on that instead. That was really good, I’m grateful for that opportunity. I don’t want him to learn that he can avoid the crow by swapping. Crows have to be retrieved as well!

I then asked if we could do the passivity bit as well, as training, and the judge granted us that too. But unfortunately we had both lost focus a bit at that point, so first he focused on the boat. After the second marked retrieve he turned around and realised how unfair it was that the other dog got to work and not him, and he whined twice. Here’s another interesting consideration to be had with Seeker- after a while, when he’s held himself together as much as he possibly can, it effects the way he handles game badly, but he’s completely silent. There might be just a little whining in the beginning of the training session, but after that he’s completely silent. For example, we were on a Spaniel hunt all day Saturday. We worked on our heeling all day and the Spaniels were working. In the beginning (say the first 15 minutes), he maybe whined three times. And then he was silent the entire day. We just need to get rid of those first whines…

(We had permission to film by the trial organisers)