The “Switching Game” – One of the Best Games for Your Dog

This game is a favorite of mine. It is a very good basic exercise for the gun dog training as well as a great exercise for puppies, but it can be trained with any dog, regardless of age. 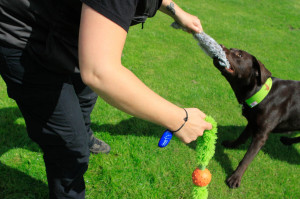 Mio is playing the “Switching Game”

In the book we call this game the “Switching Game”. You need two identical toys that the dog should learn to switch between, on cue.

For you to be able to play this game with your dog it is important that she likes to play with toys and also likes tugging games with those toys that you offer. The dog doesn’t need to be very good at holding a toy because this game will also help your dog to get better at that.

In this film you can see Anna Barnö training with her toller Alice. Anna and Alice have just finished my puppy training class, and during that class Alice learned to hold objects better, release the object on cue and hold the object and release it first when she hears the cue and come back quickly and easily. In other words basic exercises for gun dog training – and all this she learned through just one game.

Before Alice learned this game, she and her puppy pals in the dog training class learn the game “Playing is Something We Do Together” which you can find on page 26 in the book. That is a basic exercise that you can start with if you have a very young dog or a dog that loves to play without you taking part in the game.

I have had – and still have – great use of the “Switching Game” in my obedience training with my dog Tassla. She is now competing in the highest obedience class in Sweden (FCI obedience class III) and the higher up your dog gets in the obedience classes, the more retrieving they have to able to do. Most people who train obedience on a higher level usually like to focus on all the small details and then this game is great. In this film you can see how I used the game to train some specific details, but also how I can put together small parts to one unit of the obedience training with the help of the game:

With the help of this game you might train to grab quickly, hold an object, come back at full speed with the object, releasing it on cue, and not to run to pick up a toy without a cue – and actually even steadiness! In addition, you and your dog have a lot of fun together and that might be perhaps the best of all. With other words a great game!