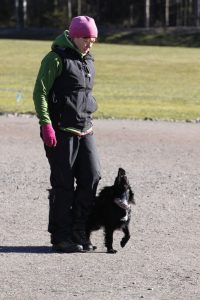 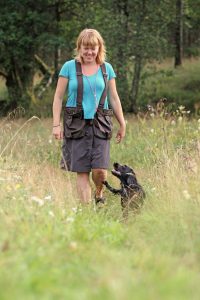 Sometimes I get the question if I am not worried that my different dog sports are going to collide with each other. Am I not running the risk of confusing my dog; won’t it mix up what to do?

Tassla and I did done a lot of competitive obedience younger. For a long time I thought the two sports only benefited from each other. For example, getting a good heeling for hunting is not particularly difficult after having trained heeling for competitive obedience. In obedience, the attention to detail is almost neurotically high 😉 Heeling means being glued to my side (without crowding me), without changing position one millimeter and furthermore, the dog should preferably look towards me the entire time.

Teaching the somewhat freer heeling for hunting (heeling for spaniels is not as particular as for retrievers) went very smoothly. “But your dog shouldn’t be watching you the entire time in the hunt”, someone might object. No – and I can promise you that she won’t. When working on heeling for hunting, Tassla sometimes moves over the obedience heeling behaviors – such as, for example, looking a lot at me – but when we get out in the field when it’s time for hunting, the little rascal has her full focus outwards towards the field. Dogs learn where the fun going to happen incredibly fast!

So, heeling for obedience helped me in working on heeling for hunting, because Tassla was already heavily reinforced for walking by my side. An example of the opposite – when hunting helped the obedience – is directional work.

Here in Sweden, in the highest class in competitive obedience, you send your dog to a cone 10 meters out. Your dog should stop there on cue, turned towards you. You then need to direct your dog to one out of three placed out dumbbells that are lying another ten meters out on a straight line (behind where the dog is standing, turned towards you). It’s always either the dumbbell to the left or the dumbbell to the right that is to be retrieved (and you’ll draw that decision before hand), never the one straight ahead. Here’s what it looked like when we competed a couple of years ago:

When I began working on the directed retrieve described above, we’d already been working with casting in the hunt for some time. It was quite easy to get her to run to the left or right, even if you need to use a lot less body language in obedience (for example, you mustn’t move your feet). Sending her in different directions was easy because we had trained it a lot for hunting. 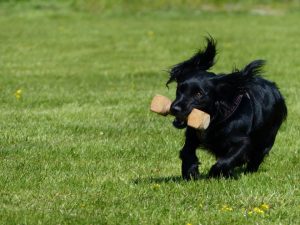 But this was also the very first time the sports collided! I trained Tassla to always ignore that dumbbell in the middle through a lot of distraction training. I really proofed her leaving that middle dumbbell. I put a whole lot of toys on the middle dumbbell, moved it much closer to her and rewarded her heavily for ignoring the pile and running on to the dumbbell I was directing her to. Since Tassla is used to active distraction training (leaving the stuff that she’d like and doing what I want always leads to massive rewards for choosing the right option), she quickly realized that she shouldn’t mind that dumbbell in the middle. But there were situations when she ran straight for the middle dumbbell. I then asked her to stop short (and rewarded that lovely stop. She really can halt two centimeters from the dumbbell and not take it!) and sent her to the correct dumbbell. All in all, this meant that she believed that she should never take the dumbbell straight behind her. That is correct in the obedience situation, but what about in hunting situations?

After having trained a lot of obedience and no hunting for a long period of time, I was out, working on casting for hunting. We were working on “push backs” were she should turn around and run straight out behind her to retrieve what ever appears there. For once when working on skills for hunting, we were on the regular lawn where we usually train obedience. What happened was that Tassla ran straight over the dummy. Alternatively, she turned a little before (it was fully visible) and ran either to the right or to the left. In her world this was just the correct thing to do! Good dog!

I took a step back in the training and sent her to the dummy when she was facing it, at a distance of one meter. I rewarded her heavily for taking it. I then threw out the dummy the same one meter, turned Tassla so she stood with her back towards it and cued her to retrieve. She took it straight away and I again rewarded her heavily. Then I increased the distance between dog and dummy and myself and “pushed” her back out again. No problem, she took the dummy. Then I went home, with new information to consider.

A few days later I went out to train where we normally work on hunting skills. We tried the push back to the dummy again and she took it every time I asked her. The directional retrieve for obedience remained intact too.

But all this is fine! It’s simply all about fluency in both skills. After all, they differ a lot in what signals I use – cues and body movements – and when Tassla is sure of where the differences lie, , I don’t mind trying mixing the environments up again. After all, that’s just proofing that she really understands my instructions. 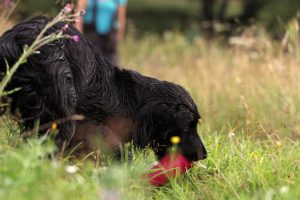 So, no; I don’t worry about any confusion. It’s all just about teaching all the parts to fluency, so that the dog always knows exactly what I mean. If confusion arises, that just tells me that I haven’t done the work well enough yet. Then we’ll simply train more – and better!