When The Hold Isn’t Good Enough 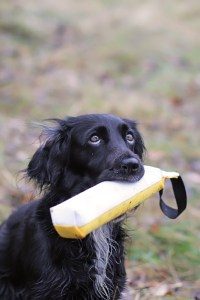 A while ago I had a project with Tassla. The goal wass to improve her hold. She’s always had a leaning towards a somewhat loose hold and most of all; she’s been likely to chew the objects that she’s retrieving.

In order to develop a firm hold, I’ve been playing with her a lot. I think playing tug of war is a good tool when working towards a firm hold, because it’s virtually impossible to chew or keep a loose grip if you (i.e. the dog) are pulling backwards. I’ve played; Tassla’s got to pull. I’ve held my ground but also moved towards her and sometimes I’ve let go, and there, just as I release the pressure on the toy, she’ll chew. If she chews, I’ll try to steal the toy back immediately. Chewing equals the fun thing going away. That’s a useful and fun game that you can play in your everyday life as well. When Tassla brings something to me, she has to have a firm hold on the object before I ask her to release on cue. If she doesn’t hold on properly, I’ll steal the toy and tease her with it.

From playing tug, I’ve then gone on to letting go of the toy completely. I’ve then reminded Tassla to keep a firm hold by using reversed luring (the best helping aid in the history of man!), or by stealing the toy like before. At the same time, I’ve also lowered the intensity of the play and turned quieter. I might for example back up, holding the toy in front of me with both hands, and let Tassla go for it and grab it.

When we’ve passed that first stage of her trying to chew the object and when she can hold on a bit firmer, I’ve in other words gone from full on play to more quiet activities. But an advantage to teaching this through play, is that she’ll be anything but calm when retrieving. We might be out on a hunt where arousal is high and she’ll need to retrieve newly flushed and shot game. She needs to be able to keep her cool even when she isn’t cool. 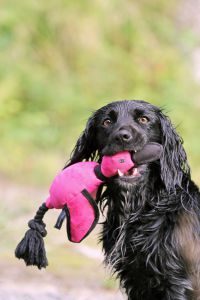 So we’ve been playing, but most of all I’ve been using reversed luring, with or without connection to play. I’ve had to work pretty hard at times in the obedience training too for Tassla to hold the dumbbell without chewing it. The fun and difficult part of the retrieve has been to combine speed and holding without chewing. When the speed and arousal rises, the chewing has a tendency to show up.

Now the time has come to work on having a firm and calm mouth when holding game. We haven’t worked nearly enough with game, and have no other reason for this than me being lazy. This year I’ve got my act together and filled my freezer with game. During the last month we’ve worked on retrieving game and as usual this training thing kind of works. What you work on improves, isn’t it magical?

Game is of high value to Tassla. She’s VERY interested and likes to chew it a bit before picking it up properly. If she needs to run out first to retrieve the game and return at full speed, she might go a bit overboard. She just has to push the game around a little bit, pinch it and maybe chew it a little, before grabbing it properly and bringing it back. I think it stems from a lack of experience, that we simply haven’t worked enough on handling game.

But naturally, we’re not going to leave it like that. I want her to pick it up without hesitation, bring it back to me and keep a firm hold until I cue ”thank you”. So lately, we’ve been training a bit every day and made the exercises a bit more challenging with each session. For example, we’ve done this:

First, Tassla gets to grab the game from my hands. I’ll back up, she’ll follow and when she grabs the game she gets to carry it for a few steps as I use reversed luring with a big piece of hot dog in my open hand. If her hold is good, I’ll cue ”thank you” and she’ll get the hot dog. I’ve then gradually lowered the game towards the ground, had Tassla sit down in front of it and recalled her from a short distance. She’ll still be calm as she picks up the game since she’s very close and doesn’t have the chance to pick up any speed. But at the same time she’s thinking of the recall and wants to get to me. 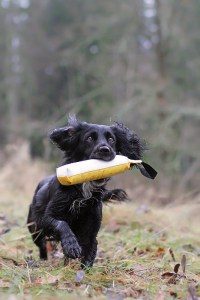 I’ve then gradually increased the distance, either between Tassla and the game, or between Tassla and myself. We’ve then moved on to letting her sit down facing the game, but facing away from me. This means that she’s still close when she starts out, but I’ve added the difficulty of her turning towards me after picking up the game. When she can do that without hesitation and with a firm hold, I’ve moved her closer and closer to me, so that she’ll pick up more and more speed before picking up the game. Finally, she’ll do a full retrieve. At that point, she’s been rewarded for being correct (holding without chewing) so many times, that she’s been successful even at higher speed.

As you can see in the video, I’m not working primarily on grabbing or on delivering, but rather just holding without chewing. I’m trying to make it easy for her to pick up the game nicely, for example by reinforcing with a whistle if I find that she starts poking it. However, I’m a bit too anxious about her doing things to the game. A couple of times I think she’s just trying to find a good grip, but I’m afraid that she’s going to start poking the game and I blow the whistle without really needing to. I’m also helping her to be able to handle the deliveries well by using reversed luring when she reaches me every now and then. My intention is for her to maintain a calm ”I should hold on to this thing” thought until I cue ”thank you” – not throw the game at me at full speed. But making it easier for her to do the pick up and the delivery is pretty significant. If I hadn’t helped her out, she might have practiced picking up and delivering the game wrongly.