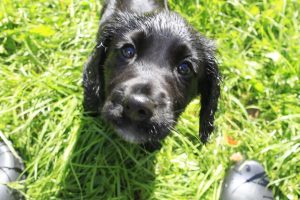 In Retrieving For All Occasions we describe many ways to get the dog used to game. I won’t cover them all here (you get to read the book J), and it’s also Elsa who’s by far the most experienced in getting dogs used to game through all the clients she works with.

There seem to be almost as many ways of getting a dog used to game as there are dogs. (And some ways clearly seem smarter than others!) But the fact is that Elsa and I have trained our four gun dogs differently. And on top of these ways, we have all the different ways with clients of Elsa’s.

I’d just thought I’d share how I have been working with Tassla. When Tassla came to us as a seven week old puppy (in Finland you get to bring your puppy home at seven weeks), the breeder, who’s a hunter, sent me home with two nice wings.

I presented a wing already on the first, or perhaps second, week that Tassla was with us. Tassla picked it up from the ground with a growl, tried to rip it to parts and then happily took off with it… J

Oops, that wasn’t quite what I had in mind, since she happily brought me everything else – I didn’t even have her on leash – but I managed to entice her to come back to me and exchange the wing for a nice treat.  I then worked on deliveries for a couple of weeks and when she was really skilled at pressing a toy into my hand, we tried the wing again. This time all went well. You can see what it looked like in the beginning of this film:

But retrieving a small dry bird wing and taking a whole bird isn’t really the same thing. At least Tassla didn’t think so. The first times Tassla got to ”meet” a bird, I filmed it. I was at my friend’s Catta’s house (she a huge inspiration to me), and she had put some birds out on the grass. Tassla got to take her time to examine them and dare to approach them. While she did that, Catta and I just hung around, chatting. I showed some interest in the birds to by turning them over and touching them, but I did nothing to influence Tassla.

The second time we did the very same thing and after a while I began to walk off with Tassla to see if she would figure out that if she wanted to keep hanging out with the bird, she would have to bring it with her. She made a few attempts of grabbing them, but never got a good grip.

After that I brought a nice little guineafowl that I placed on my patio, in a small bag on a table. I thought that I’d try just giving her the bird a couple of times at home, when we were going out anyway. I never had a chance to try that out though, because the next morning Tassla had solved the carrying part all on her own. I let her out into the garden in the morning, and looked out a while later just to see Tassla walking around on the patio, proud as could be, with a bag on her head (the bag was small, there was no risk for suffocation). I took the bag off her and there was little Tassla, holding the bird with a soft and firm grip. After this, holding and carrying wasn’t a problem.

Tassla’s breeder, who’s not just a hunter but one of the best breeders of retrievers in Finland (and yes, the occasional Cocker Spaniel too J), also seem to do something like this when she introduces game to her dogs. The important part seems to be not to nag, hassle or cajole. Let the dog explore and examine the game at her own pace, and just break things off gently should she begin to eat it or rip it apart.

I like it, it feels very simple and without pressure. Here’s a little film of Tassla approaching the game the first few times (Catta is giving me instructions):