7 things to work on when the weather is bad! Day 3: Leave it 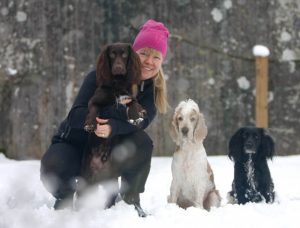 Today is day 3 of ”7 things to work on when the weather is bad” and the topic is Leave it. People have different names for this, but what we mean is for the dog to choose to not go for something and perhaps even actively turn away from it. In a trial situation that might be a thrown dummy, when hunting it might be a bird that’s been shot but that your dog isn’t supposed to retrieve but instead do something else even though he’s seen the bird fall.

I also find Leave it useful in our every day life. The dog might see something that he would like to run after, but this cue tells him to let go of that thought and just follow me instead.

The dog also learns to really listen to what I’m saying (which is definitely a topic that will come up again during these 7 days, I can tell you that much J)

I’ve been working a lot on this with Quling outdoors. I think he gets to leave 7 out of 10 dummies – it’s a way for me to try to counteract his ”I can do it myself” and his tendency to make decisions without involving me in the least 😉 It’s really paid off and he does listen to me a lot better now. 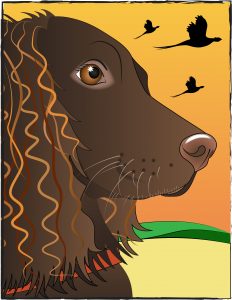 When I was going to make this video, I realised that I hadn’t trained it with Totte, so he made the perfect learner for this video. This is his very first session. Totte knows many cues and he understands the principle that it pays off to do what I want to get what he wants – which is a really big part of Elsa’s and my training system. I help him out a bit in the beginning. I lure a bit and wait for him to make the correct decision. In the very beginning I also put my hand on the bowl a bit, telling him ”this is not for you right now”. As soon as he’s mastered one level, I move on to the next. You’ll see me click for him offering to move his head away from the bowl and later I click for him actually moving away from it. He’s so cute. You can really see him thinking about the focus exercise we did the other day. But he can hear that what I’m saying is not ”Ok”, so he’s probably racking his brain.

Totte has allergies, so we have the same treats in the bowl as with me, but if you have a dog that finds this really difficult, you can have better treats with you. I also reward by having him run to the bowl on an ”ok” cue sometimes. However, that isn’t something I want to do a lot since I don’t want him to have too much expectation on the bowl. Sometimes I send him on a really short marked retrieve, but if you’re dog doesn’t know that, just skip it.

Here are some videos of Quling and Tassla as well. I try to challenge Quling (the brown dog) and a couple of times I make it too difficult. I just laugh it off and try again. Tassla (the black dog) is as always the perfect student and tries 100 % to do what I say. I had fun watching her stand about 5 cm from the dummy before realising that ”Oh no, that’s right, she didn’t say ok, I change my mind” J

Should inspiration hit, please upload a video or a photo of your training in the comment section 🙂

The lovely illustration of Quling is made by Jenny Nyberg, who’s illustrated many of the books published at Klickerförlaget.