Sometimes I get the question what I think is the most important to train with my puppy. Like, where should one start? I usually answer: “Start by observing your puppy.”

By studying how your puppy acts in a number of situations you will learn a lot about it. Certainly, some things will change – not least if you have a working breed like a gun dog or a herding dog – because their heredity will “turn on” sooner or later. But once you have studied your dog, you will also get the answers to what the dog’s strengths and weaknesses are. From this knowledge, you can start the exercises.

With Quling, the observing part has never stopped (and you should of course always observe your dog). In February, he turned two years and we’ve put all hunting training on hold since a few months back. I wanted more than him and I needed to focus on some important basic things as follows:

We needed to find something that made us both in a good mood. We needed to do things where those behaviours that makes me frustrated never gets a chance to pop up.

What made me frustrated was, for example, that Quling could not do more than a few repetitions of an exercise before he just left and ran away (!).

Another source of frustration was the fact that he put his nose down and chased like crazy every second from the moment we opened the front door for a walk until we entered the same again, sometimes completely unconnectable.

And as the sensitive character he is, it is enough that I FEEL a certain frustration for him to either give up by running away or just laying down on the ground looking like he has been abused….

Since then we have started with agility! It’s great fun, I have not been frustrated or annoyed and Quling has become braver and tougher. He has had a couple of short “I give up” events but he did let go really fast and now it’s been a few months since the last event. He has overcome his fear of the agility tunnels and instead he now uses them as self-reward :). He has been able to play tug with me when being in the agility environment – which was unthinkable in the beginning. Now he listens more to me, he dares to do more things – without running off by himself.

Confidence and cooperation – the most important of all 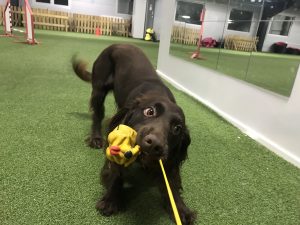 I think that by building the most important thing – trust and cooperation – it will be easy and fun with the hunting training later on. In agility, Quling can run at full speed while keeping in touch with me, following my instructions – just like you do when hunting.

In everyday life, Quling walks several times a week in a towing harness to get rid of his energy, and, preferably, once a week – I take him to a fenced area where I practice challenging recalls. This has resulted in me letting him of the leash for a short while at a meadow near home. I just stand still and he is allowed to run around me and for every spontaneous contact or coming on a recall he gets a reward.

Well, things did not really turn out as I expected when I bought this dog. I thought I would get a hard-working dog with and a lot of will to please and a hunting drive of course. But this blend of total independence and an insane hunting drive on one hand and a huge softness on the other hand – THAT is a whole new experience. Quling is black or white and I want scales of grey – and I will get it ;). So yes, it was a completely different journey than I could ever imagine. But it is rarely just as you imagine – things can actually get even better;). One thing that is good about having a challenging dog is that you get so incredibly happy when things actually work. And this is just the beginning of the journey. I really hope that we have many years ahead of us with a lot of fun and unexpected adventures and detours along the way. 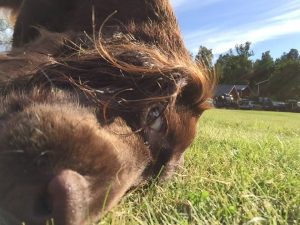 With Quling, I think the observing part will never end because everything changes all the time. At the moment, the change is for the better and I went out a couple of days ago to train some hunting with him. I just wanted to do a short session, I will put him on ‘hunting’ hold again and do something else for half a year to see if anything changes. The training however went a lot better than it did a couple of months ago. He was franker when hunting and he was more responsive to me. He never ran away nor did he give up (two things that I think are the different sides of the same coin), he remembered signals for directions, the hunt whistle and the stop whistle. 🙂 He actually felt more mature and it did not seem like he felt any pressure from my side.

At the moment, we continue with the agility, the recall training, we take our walks and we continue with the indoor training which is about doing brave stuff like rollover things that rattles and likely. Later, when things are nice and easy, we will start practice hunting again and that will be fun. At the moment, all training is very enjoyable and both of us feel good so this is a great path to continue on.

A short film of a perfect recall :): (a little tepid reward, but it is just because I had the camera in one hand – the reward is usually a full party with the most delicious treats) 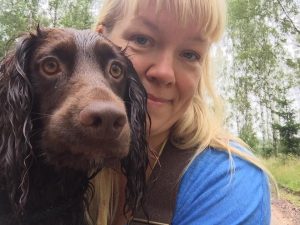 And by the way, since we spoke a lot about recall training this autumn, Elsa and I have started an online training course that we had a lot of fun doing: we promise clever and ingenuous exercises. 🙂 Check this out here: